Concentrate your question and Click the Ask! Button for your free 3 card tarot reading. 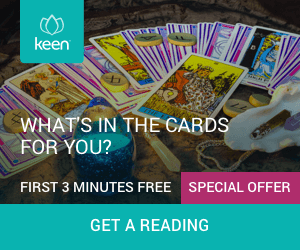 What is the Tarot?

The Tarot is a card game, which comes to us from Medieval times, where it was used as an oracle. Likewise, the Tarot actually forms the basis of our normal playing cards. Yet it is more than a pack of cards, far more than a game, and more than a method of divination. Its original use was probably as a set of magical images, designed for meditation and aid to visualization. Thus, the tarot was a tool for self-realization, enlightenment, and magic.

Respected for its spiritual significance, the tarot highly valued as a repository of ancient traditions and symbols. In these cards, secret societies studied the basic structure of the mystic initiation process. The cards speak in pictures, and pictures are the language of the subconscious. The deepest meaning of the cards lies hidden in the archetypal myths humankind has told since the beginning of time. Therefore, the Tarot can be seen as a book of Wisdom composed of 78 pages, that’s been used as an oracle since the 15th Century. Consisting of 78 cards, the tarot is divided into two groups; the 22 Major Arcana, and the 56 Minor Arcana.

How does Tarot work?

The cards are like a mirror, reflecting back to us our inner state. The images appeal to the archetypal images we carry in our subconscious, reflecting the archetypal tales known to every civilization. Therefore, we merely insert ourselves into the tale and pick up the story at the place we are at right now. Consequently, when we ask the Tarot a question, it’s like a psychic mirror reflecting back a story that has personal meaning to us.

At the heart of most questions, especially those most deeply felt, is the question of meaning. To experience life with joy you must find a sense of personal meaning. When someone asks, “What’s going on?” they usually want to know, “Why is this happening to me?”. As a result, the cards imply there are an understandable order and reason for our experiences; the events themselves are mirroring some deeper cause veiled from ordinary sight.

The first tarot decks we know of date no earlier than 14th Century France and Italy. However, this does not mean that before then, it did not exist. The earliest decks known are the Visconti-Sforza decks, created for the powerful ruling families of 15th Century Milan. It’s believed the Minor Arcana is an addition created during Medieval times. After, the Tarot gained popularity as a card game. The 22 Major Arcana was the original core, and likely formed part of a system of esoteric teaching and training from a much earlier time.

What is the Origin of the Tarot?

A clue to its origins lies in the word itself; TAROT is an Egyptian word for Royal Road (tar=path and ro=king). The Royal Road means the path to self-mastery. Egyptian tradition speaks of the Book of Thoth, which revealed the past, present, and future of all things. Likewise, magical traditions record that the god Hermes Trismegistos (Thoth, god of Wisdom), directed the creation of the Tarot. Similarly, folklore says that it was traveling gypsies (a corruption of the word Egyptians) who introduced the cards into Europe. However, it may have been brought in much earlier, with the Egyptian Mystery cults. Egyptian mystery cults were very popular in the later centuries of the Roman Empire.

“Tarot” is also a French word, in which the last “t” is not pronounced – TARO. This gives a further depth of meaning to the word; “rota” in Latin (the language of ancient Rome), means “the wheel”.

The Five Books of Moses (who was raised in Pharoh’s family, thus trained in the Egyptian religion) is the TORAH. This word has become synonymous with the divine law. Tarot is like a wheel, a tool that takes you on the royal road. Similar to the word for the Hebrew sacred text, the Torah, tarot reveals the universal principles of life that we must travel to reach our destiny. Thus, the tarot is a symbolic guide to self-realization, a vehicle that helps us evolve into enlightenment.

The Egyptian god of the Sun, Horus, and the Greek Sun god Apollo were both gods of prophecy. The piercing eyes of the hawk could see long and far; this fast, high flying bird brought messages from above to those below.

“Know Thy Self” was the inscription above the door of Apollo’s temple at Delphi. The Oracle at Delphi gave her prophecies in the form of a riddle, or story. As a result, the person inquiring was left to work out the meaning for themselves. The eye of Horus was the Moon, the mirror of the Sun. Symbolized in the Egyptian Book of the Dead as “the divine light imprisoned in matter”, the lunar eye was something which must be liberated. Thus it is said that the Eye is the seat of the Soul; it is all-powerful, for it possesses in itself the means for deliverance.

Developing this “Eye of Light” is what the Egyptians knew as the ability to see patterns in apparently random actions and happenings; it is the ability to read omens and signs. In myth, the Eye of Horus was wounded and fragmented by the dark shadow of Set. It is the job of Thoth, God of Wisdom, Science, and Divination, to heal the Eye. Moreover, this is the archetypal story of the search for wholeness. By remembering who we essentially are (the sun within), we can draw on our universal potentials. Finally, by re-membering our dismembered form (as Osiris did) we evolve and expand our capabilities to become truly human.

Chat by text with an available Kasamba psychic online now, below.

We are a participant in the Amazon Services LLC Associates Program, an affiliate advertising program designed to provide a means for us to earn fees by linking to Amazon.com and affiliated sites.